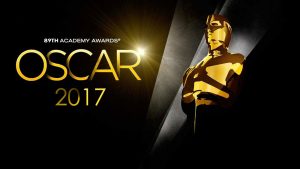 Nineteen years ago, in February of 1998, I decided to stay up all night to watch the Oscars® ceremony live as it happened, not knowing that I was beginning a personal tradition that I would never be able to bring myself to walk away from.

Now, here I sit, a little older, a little chubbier, but in no way diminished in my enthusiasm for the biggest night of the year in Hollywood’s diary.

Being broadcast on the day the sudden death of film legend Bill Paxton was announced in the media, this ceremony promises to be a poignant one, as this has been a year of great loss in Hollywood, with the passing of legends such as Carrie Fisher and Debbie Reynolds, but also a politically-charged evening, in terms of recent events.

This year is slightly different for me, as for the first time in almost twenty years, I have some company for Oscar® night. A month ago, I adopted a rescue Cat named Poppy, and she has made herself comfortable for the evening’s proceedings on the sofa next me.

So, without further a do, let’s hit the red carpet, courtesy of ABC:

Matt Damon sports a bow tie and speaks of how proud he is of long-time friend and Best Actor nominee Casey Affleck for Manchester By The Sea…Ryan Gosling says he has kept up his piano skills as seen in La La Land, although he only knows how to play the numbers from the film…Denzel Washington issues high-fives to the fans seated in the bleachers…Fifty Shades Darker beauty Dakota Johnson dressed head-to-toe in cream-coloured silk – an outfit she may come to regret tomorrow…Best Supporting Actor nominee Jeff Bridges cutting a dapper figure on the red carpet with his beautiful wife…

The show gets under way on a high note, with a performance of Best Song nominee Can’t Stop The Feeling from Justin Timberlake, and a fun opening monologue from host Jimmy Kimmel, who jokes, “I’d like to thank President Trump, because remember last year when The Oscars® seemed racist?”

Last year’s Best Supporting Actress Alicia Vikander takes to the stage to present the award for Actor in a Supporting Role.

ACTOR IN A SUPPORTING ROLE

Lucas Hedges, Manchester by the Sea

Kate McKinnan and Jason Bateman take to the stage to present the awards for Make Up and Hairstyling and Costume Design. McKinnan announces that “Costumes are the cost of Umes…”

Fantastic Beasts and Where to Find Them – WINNER

Octavia Spencer takes to the stage with her co-stars from Hidden Figures to introduce Catherine Johnson – the only living participant in the real life events that inspired the story of the film. They remain to present the award for Documentary Feature.

I Am Not Your Negro

O.J.: Made in America – WINNER

Dwayne Johnson takes to the stage to introduce a performance of How Far I’ll Go from the Disney movie Moana by character voice, Auli’I Cravalho – which is nominated for Best Song. The performance is stunning.

President of the Academy Cheryl Boone-Issacs arrives to say how proud she is to the awards becoming “more diverse with every passing day.”

Bags of sweets fall from the ceiling on little parachutes courtesy of host Jimmy Kimmel, who says movies without candy is “un-American”.

Chris Evans takes to the stage to present the award for Sound Editing and Sound Mixing.

Rogue One: A Star Wars Story

13 Hours: The Secret Soldiers of Benghazi

Vince Vaughn is here to tell us about the Academy’s Governor’s Awards, which honoured Jackie Chan.

Last year’s Best Supporting Actor, Mark Rylance, takes to the stage to present the award for Actress in a Supporting Role.

ACTRESS IN A SUPPORTING ROLE

Michelle Williams, Manchester by the Sea

Highlight of Viola Davis’ acceptance speech: “I became an actor, because we are the only profession that celebrates what it is to live a life.”

The Oscars hijack a Hollywood Tour Bus!! A group of civilians are in for the surprise of their lives…

Charlize Theron talks about how Shirley MacLaine inspired her career, who joins her on stage to present the award for Foreign Language Film.

Dev Patel takes to the stage to introduce Sting, who gives a beautiful acoustic performance of The Empty Chair from Jim: The James Foley Story – another nominee for Best Song.

Steinfeld and Garcia Bernal remain on stage to present the award for Best Animated Feature.

Kubo and the Two Strings

My Life as a Zucchini

Be still my heart!! It’s my beloved Jamie Dornan!! Oh, and Dakota Johnson is here too (humph), who looks at Dornan and says, “You look familiar…”, to which he replies, perplexed and amused, “I’m sure I do…!” They are here to present the award for Production Design.

Fantastic Beasts and Where to Find Them

The Hollywood Tour Bus has arrived!! Justin Theroux and Jennifer Aniston are encouraged by Kimmel to give something away to the tourists – and Aniston gives her sunglasses to one of the ladies! An engaged couple are “married” by Denzel Washington!  All of them take selfies and shake hands with Hollywood royalty – and have the best day of their lives. They are overwhelmed and a little scared, but the prank goes off without a hitch!

A short clip is shown honouring the ways in which movies transcend boundaries such as language or nationality.

Felicity Jones and Riz Ahmed take to the stage to present the award for Visual Effects.

Kubo and the Two Strings

Rogue One: A Star Wars Story

Seth Rogan talks about how Back to the Future inspired him, and then takes to the stage with Marty McFly himself, Michael J. Fox, who gets a standing ovation. They stay on stage to present the award for Film Editing.

John Cho and Leslie Mann talk about the Academy’s Science and Technology Awards. They make fun of the fact that nobody ever really knows what they are. Mann jokes, “The event was so special and prestigious, that none of you were invited.”

Javier Bardem talks about how Bridges of Madison County inspired him, and then he and Meryl Streep take to the stage together. They present the award for Cinematography.

Oscars Edition of Mean Tweets! Celebrities read horrible Tweets people have written about them! Brilliant.   My favourite is Tilda Swinton reading a Tweet about a dog that looks like her.

Ryan Gosling and Emma Stone arrive! They talk about the two songs from La La Land nominated for Best Song, City of Stars, and Audition. John Legend performs both songs to perfection.

Samuel L. Jackson has, at last, arrived! He is here to present the award for Best Original Score.

Scarlett Johansson takes to the stage to present the award for Original Song.

“Audition (The Fools Who Dream)” from La La Land

“Can’t Stop The Feeling” from Trolls

“The Empty Chair” from Jim: The James Foley Story

Music and Lyric by J. Ralph and Sting

“How Far I’ll Go” from Moana

Music and Lyric by Lin-Manuel Miranda

An emotional Jennifer Aniston takes to the stage to introduce the In Memoriam segment. She gives honourable mention to Bill Paxton, who she says, “left us just yesterday.” The most notable amongst those listed are Gene Wilder, Garry Marshall, Anton Yelchin, Mary Tyler Moore, Prince, Kenny Baker, Curtis Hanson, John Hurt, Debbie Reynolds, and Carrie Fisher.

Matt Damon and Ben Affleck take to the Oscar Stage for the first time since 1998 – my first Oscar Night. Kimmel, who has had fun all night with fake enemy Damon, has the orchestra try to play him off the stage every time he tries to speak.

Manchester by the Sea – WINNER

To follow the sweets from earlier, Kimmel drops Doughnuts and Cookies from the Ceiling on little parachutes. The celebs go nuts – in particular, Octavia Spencer.

Halle Berry arrives with very big hair to present the award for Directing.

Manchester by the Sea

Last year’s Best Actress Brie Larsen takes to the stage to present the award for Actor in a Leading Role.

ACTOR IN A LEADING ROLE

Last year’s Best Actor Leonardo DiCaprio arrives looking every bit the movie star to present the award for Actress in a Leading Role.

ACTRESS IN A LEADING ROLE

Warren Beatty and Faye Dunaway arrive on stage to present the award for Best Picture.

Manchester by the Sea

**SHOCK TWIST ALERT** Wait – WHAT?? Warren Beatty has read the WRONG envelope!!! They announce La La Land as Best Picture winner, and the cast and crew are up on stage mid-speech, accepting their award, but then Beatty comes to the mic to say MOONLIGHT has actually won Best Picture, adding, “this is not a joke.”

I have never seen anything like this in my almost twenty years of the Oscars®, but never in Oscar® history!!

Well… I’m still in shock! That was phenomenal. I thought Jimmy Kimmel did a great job, and was relieved that there were not too many political speeches, despite Kimmel Tweeting Donald Trump. Blimey. Beatty is going to BREAK THE INTERNET.

Phew – I need a coffee…for the first time in 19 years, I have to go into work in a couple of hours!! That is how dedicated I am to the Academy. Invite me to the Dolby Theater for my 20th Oscar® Night next year! PLEASE!

Whether I end up on the Red Carpet in LA, or remain in chilly England on the sofa with my Cat, I’ll see you next year, Folks.