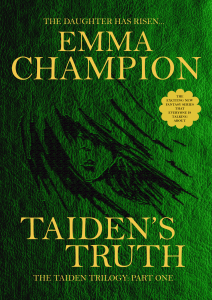 Following on from our last update, we are thrilled to announce that Emma Champion was offered a publishing contract in June 2018 for her debut novel, TAIDEN’S TRUTH©.

The cover and its illustration, along with the promotional tile (above) were digitally designed by Champion herself, as she collaborates artistically with her publisher, Austin Macauley PublishersTM.

It seems her years of marketing experience are being put to good use.

Austin Macauley have described TAIDEN’S TRUTH© as “an imaginative and entertaining read“, consisting of “well-crafted characters“, and a “worthwhile addition to the genre” of fantasy fiction.

Test audiences who have read TAIDEN’S TRUTH© say it is a story that stays with the reader long after, and that it is addictive. “I couldn’t put it down!” exclaimed one test reader. “You wouldn’t guess the writer had never written a book before,” stated another.

TAIDEN’S TRUTH© has been officially formatted, and is now with a team of proofreaders for the editing process. The book will be available in print (hardback and paperback), and as an eBook, and is due for release in 2019.