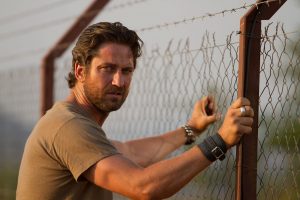 Since his iconic, breakout performance as King Leonidas of Sparta in Zack Snyder’s 300 (2006), we, as an audience, have been treated to the many faces of Gerard Butler – and I use the term “treated” in the loosest possible sense, as satisfaction isn’t always guaranteed.  We’ve had “Rom-Com Butler” – The Ugly Truth (2009), The Bounty Hunter (2010); “Tough-Guy Butler” – Rocknrolla (2008), Law Abiding Citizen (2009); and “Heart-Warming Butler” –  P.S. I love You (2007), Nim’s Island (2008).  Butler’s back-catalogue has delivered a mixed bag of movies – some: demonstrably dire disasters; others: firm fan favourites.  As a result, the release of a Gerard Butler star vehicle brings with it a significant amount of uncertainty; raising two principle questions: which face of Butler will we be presented with?  And, will the end result be turkey or triumph?

The interesting thing about Machine Gun Preacher (2011) is that director, Marc Forster, appears to have cast Butler based on the fact that the central character, real-life crusader, Sam Childers, is the physical embodiment of Butler’s acting range to date.  Childers is part-Love Interest, part-Hard Man and part-Loveable Rogue.  As such, Butler was the obvious – nay – genius choice.

The film begins with Childers’ release from prison, his loyal wife Lynne (Michelle Monaghan) waiting to collect him.  He is of the greasy, unhinged category – mullet hair, a black, sleeveless t-shirt and tatty jeans his wardrobe of choice, and the role of sexy stripper rather than respectable till-tart his preference of profession for his missus.  He quickly slips back into habits which appear to be old – drinking, drugs and violence – much to the dismay of Lynne and daughter Paige (Madeline Carroll), who have “found Jesus” in his absence.  When Childers stabs a hobo during a Hooch ‘n’ Heroine binge, he asks his wife for help, who, consequently marches him to church and gets him baptised.  He decides to turn over a new leaf, making an honest living as a construction worker and providing for his family.  Before long, the newly-sober Childers starts his own, successful building company, and happily sings along to hymns on Sundays.

When a preacher comes to speak at their local church about African families and children in desperate need of aid and charitable donations, Childers is hit by a wave of inspiration.  He takes his construction company to Sudan, building houses and rebuilding fallen shelters.  There he strikes up a friendship with freedom fighter Deng (Souleymane Sy Savane), who shows him the extent of the conflict between the Christians and the LRA which has been raging for some time.  Upon discovering that many children are sent out of their villages at night by their parents to find a safe place to sleep, Childers returns to the US a changed man.  He declares that he plans to build a church in his hometown of Pennsylvania, and an orphanage in South Sudan.  He begins to lead something of a double life – Christian Americana-personified at home (where he inadvertently becomes pastor of his newly-built church) and Child-Defending Freedom Fighter abroad (where he inadvertently becomes the local hero).

Consumed by the injustices and the level of child carnage he has witnessed at the hands of the LRA, Childers finds himself brandishing a shotgun and taking on the rebels himself, earning the titular nickname.  Because of the stark contrast and cultural difference between life in the Sudan and in the US, Childers finds it increasingly difficult to operate in civilised society and to deal with petty social etiquette.  His family begin to suspect that he cares more for the Sudanese orphans than he does for them – the consequences of which are none more heartbreaking than the breakdown of his friendship with Donnie (a fantastic Michael Shannon).

Machine Gun Preacher is already a subject of controversy.  This is largely due to the film’s religious and somewhat delicate, political content.  What this film achieves, however, is the deliverance of a thoroughly engaging and true story as well as a message of second chances, whilst raising awareness for a conflict which has largely, as Deng puts it, “been forgotten by the whole world”.  The final moments of the film do feel a little like a manipulative, Angelina Jolie-esque plea, which causes you to suspect that the film has been one long and elaborate charity campaign ad, and that you’ll be expected to donate funds to Oxfam employees making Puss-in-Boots eyes at you upon leaving the multiplex.

However, I’m happy to report this was not the case, and what you take away with you is the satisfaction of Gerard Butler’s first, truly multi-faceted performance; his portrayal of Sam Childers is stirring and effecting, evoking a multitude of emotion.  At times, it is hard to get behind the actions of our anti-hero; he becomes neglectful of his duties to his own family, and ruthless in his fight to protect the orphans, not to mention his twisted past.  Ultimately, however, you end up respecting his will to do what others would not, and his family for supporting him.  “God gave you purpose, Sam Childers,” Lynne tells him on the phone in one scene.  This is true – it is a purpose that the real Sam Childers still serves to this day – and the end credits provide the audience with photographic evidence of this.

No matter your own religious and/or political viewpoint, Machine Gun Preacher is technically brilliant (the contrast between the yellow hues and rippling heat of Sudan compared with the distinctly Wintry colour palette of scenes set in the US is subtle yet effective), and entirely memorable as movies go.  Performances from the supporting cast are all solid and plausible, and the film, as a whole, carries a disturbing level of verisimilitude without resorting to overuse of “shakey-cam” techniques – put simply, it feels real without mimicking the documentary style – by today’s standards, quite a feat.  This is not going to be everyone’s “cup of tea”, with graphic images of drug use and murdered children, as well as its heavily-religious agenda; but there is much to admire here, if you’re willing to see past this film’s crude exterior and through to its well-meaning heart – perhaps an analogy for Childers himself.

Machine Gun Preacher is due for UK release on the 2nd of November.