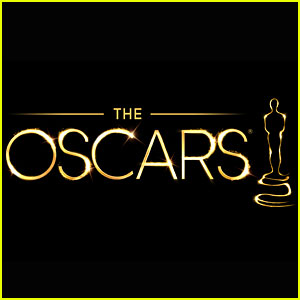 Aaaaaaaaaand: OSCAR© time!  Another year, another name for the venue… What, in my mind, will always be known as The Kodak Theatre, was last year named the Hollywood and Highland Centre Theater, and this year goes by the title of The Dolby Theater.  Can’t they just pick a corporate conglomerate and stick to it?!  At least The Dolby Theater has a vaguely cinematic ring to it…

2014 sees this, the 86th OSCAR© ceremony kicking off with a very chilled Red Carpet, and, as ever, my arrival footage of choice comes courtesy of E! Channel.  Here are the highlights:

With the preamble firmly out of the way, it is time to get this party started!  OSCAR© 86 here we go!

Ellen DeGeneres takes to the stage.  “It’s been a tough couple of days here in Hollywood – it’s been raining.  We thank you for your prayers.”  Ellen actually mentions the fact that Jennifer Lawrence fell out of her car on arrival.  “No one needs to know that,” she announces to the audience.  “Here are my predictions for tonight: Possibility number one, 12 Years a Slave wins Best Picture.  Possibility number two, you’re all racists…”

Ann Hathaway is here to present Best Actor in a Supporting Role.

Best Actor in a Supporting Role

Jim Carrey compares animation to LSD, does a killer impersonation of Bruce Dern, and makes a joke about not being nominated.  He owns the stage.

Kerry Washington introduces a performance of Happy by Pharrell Williams from Despicable Me 2, who has changed out of his ridiculous shorts, thank the Lord Jesus.  He dances with members of the audience, including Lupita Nyong’o, Meryl Streep and Amy Adams. The whole audience gets on their feet.  Just brilliant.

Harrison Ford takes to the stage to the theme from Indiana Jones.  He talks about three of the nominated films up for Best Picture.

Channing Tatum is here to present fresh talent. He’s lost weight! Just before the ad break, Ellen sticks her face between Leonardo DiCaprio and Sandra Bullock seated together in the audience, and says to the camera, “More Oscar surprises after this!” To which Leo cracks up laughing.

Ellen gives Bradley Cooper, seated in the audience, some lottery scratch cards and a quarter, which she says she’s going to need back, and says that if he wins a lot, he has to split the winnings with her.

Matthew McConaughey and Kim Novak take to the stage to present the animated categories.

Sally Field introduces a segment about everyday heroes – a great montage of clips.

Zach Efron introduces a sweet performance of The Moon Song from Her by Karen O.

Ellen reappears on stage with a guitar, which she does not play.  She introduces Jason Sudeikis and Kate Hudson, who present the short film categories.

Aquel No Era Yo (That Wasn’t Me) (Esteban Crespo)

Pitääkö Mun Kaikki Hoitaa? (Do I Have to Take Care of Everything?) (Selma Vilhunen, Kirsikka Saari)

Karama Has No Walls (Sara Ishaq)

Ellen wanders the audience randomly saying hi to celebs such as Martin Scorsese, and offers to order everyone pizza.

Star of 20 Feet from Freedom, Darlene Love, sings her acceptance speech and receives a standing ovation led by Bill Murray.

Kevin Spacey talks about a separate ceremony which took place in the weeks before.  Angelina Jolie accepted an award for her humanitarian work.  A clip is shown of her emotional acceptance speech, and Brad Pitt kisses her head in the audience of The Dolby Theater as they watch it back.

Ewan McGregor and Viola Davis take to the stage to present the next award.

It’s a change of outfit for Ellen.  “I put on different clothes,” she says, matter-of-factly.

We see an introduction from Brad Pitt for U2, performing their song Ordinary Love from Mandela: Long Walk to Freedom.

Ellen instigates a brilliant moment where she tries to break the record for the most retweeted photo on Twitter, by inviting a number of celebrities into a spontaneous group photo, the calibre of which could never again be matched: 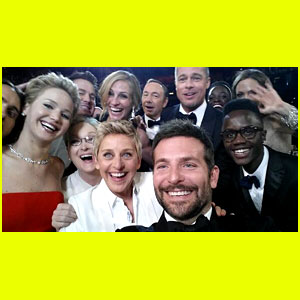 Chris Hemsworth and Charlize Theron introduce the sound categories, and totally fluff their lines on the autocue.

The Hobbit: The Desolation of Smaug (Brent Burge, Chris Ward)

Ellen comes out on to the stage.  She looks a tiny bit different.  “I added a scarf,” she says, bashfully.

Christophe Waltz is here to present the next one!

Best Actress in a Supporting Role

Ellen actually DID order pizza!  She gives it out to the celebrities (who go nuts for it – Brad Pitt hands out paper plates; Harrison Ford inspects the toppings and selects his slice, etc.), but then says she doesn’t have any money to pay the delivery guy.  “Where’s Harvey Weinstein?” she asks.

A new movie museum to open on 2017 is announced!  It looks awesome!

Amy Adams and Bill Murray come out holding hands.  “Baby, you look like $146,000,000 domestic,” he says to Amy.  “You’re the brains of this operation – tell ‘em who’s up for Best Shooter.”  The nominees are announced, and the Bill adds, “Oh wait, we forgot one – Harold Ramis for Groundhog Day, Ghostbusters and Caddyshack.” This gets a cheer from the crowd for the recently passed Ramis.

Whoopi Goldberg is here! She talks about The Wizard of Oz.  The children of Judy Garland are in the audience.  She introduces P!nk who sings Somewhere Over The Rainbow in a glittering ruby gown, and absolutely nails it. She gets a well-deserved standing ovation. Outstanding.

Ellen comes out dressed as Glinda the Good Witch after the ad break.  “Is it over?” she asks.  “Not cool, Guys – you were gonna call me…”

Chris Evans arrives to introduce a montage about movie heroes.

Glenn Close arrives to present the In Memoriam reel.  Notable honourees are Phillip Seymour Hoffman, Harold Ramis, Paul Walker, Ray Harryhausen, Shirley Temple and James Gandolfini.  Bette Midler sings Wind Beneath My Wings at the end of the reel.  She gets a standing ovation, which makes her cry.

Ellen comes on stage to announce that we all crashed Twitter retweeting the selfie picture, thus making history.

Goldie Hawn arrives to tell us about three more of the nominees for Best Picture.

John Travolta is here to introduce a performance of Let It Go from Frozen by Idina Menzel  (Only he says her name is Adele Dazeem.  May need to go to Specsavers, John…).  She gets a standing ovation, despite her timing being slightly out.

Jamie Foxx and Jessica Biel take to the stage to talk about film music.  Foxx does a one-man performance of Chariots of Fire which gets a laugh from the crowd.

The Moon Song – Her

Ellen borrows Pharrell Williams’ hat, and passes it around collecting money for the pizza she ordered earlier.  Kevin Spacey fronts up the most.  Brad Pitt puts some in.  “Twenty?” Ellen enquires.  “You were in two pictures…”

Robert DeNiro and Penelope Cruz take to the stage to present the screenplay categories.

Spike Jonze gets a standing ovation as he makes his acceptance speech.

Angelina Jolie and Sidney Poitier take to the stage.  Poitier gets a standing ovation.  They are here to present Best Director.

Best Actress in a Leading Role

Best Actor in a Leading Role

Will Smith is here to deliver the big award of the night.  Here we go – which film has it?

The Wolf of Wall Street

So that’s it!  What a great ceremony this year.  Ellen rocks – they need to bring her back – some truly wonderful moments – the best in years.  See you all in 2015!  Happy OSCAR© Night, Everyone!

For a great photo gallery of pictures from the ceremony, visit:

The Story of the OSCARS© Pizza Delivery Guy: