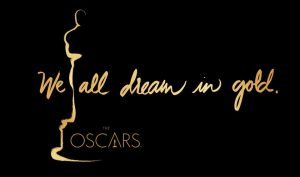 And so, I embark on what is my eighteenth Oscar® Night, and the sixth anniversary of EmmaChampion.com’s Annual Oscar®  Report.  Time sure flies when you’re steadfastly dedicated to geekdom.  I was eighteen years of age in 1998 when I first stayed up all night to watch the glitterati gather in La La Land to pat each other on the back for a year well done.  Little did I know that a ritual was born that night – one that would span almost two decades, and see me get through a heck of a lot of wine and popcorn.

As Middle Age firmly sets in, gone are the cinema-style junk food snacks, in favour of carrot batons and M&S hummus dip – it catches up with all of us, I suppose.  However, there is no denying that the Oscars® is, for me, the most exciting moment of Awards Season, and a real highlight of my year.  So now, without further a do, here is a play-by-play of the 88th Academy Awards 2016.

Best Song nominee Sam Smith, wearing a Dunhill tux, reveals that he was drunk when he walked the Red Carpet at the Golden Globes…Best Actress nominee Saoirse Ronan, wearing a bottle green Calvin Klein gown and giving her award ceremony attendance advice, which is ‘eat beforehand, because you won’t get fed again for about six hours…’…Best Actor nominee, Eddie Redmayne, looking dapper in Alexander McQueen explaining that he is feeling very ‘zen’ this year compared to being a nominee/winner last year…Best Actress nominee Cate Blanchett in a stunning, silver-blue gown embellished with feather flowers…Heidi Klum wins the night’s Most Hideous Outfit™ award in an asymmetric, lilac prom-like Versace dress which would not have looked out of place in 1985… Best Actor nominee Leonardo DiCaprio and Best Supporting Actress Nominee Kate Winslet pose together for pictures before the paparazzi…Best Actor nominee Brian Cranston predicts that The Revenant will take home Best Picture…

This year’s host Chris Rock’s monologue opens with some predictable jokes about this year’s race controversy, stating, “If they nominated hosts, I wouldn’t even have this job!”  He goes on to say, “Jada (Pinkett-Smith) boycotting the Oscars® is like me boycotting Rhianna’s panties: I wasn’t invited!”  A few jaws drop…

Welcome to the stage Emily Blunt and Charlize Theron to present the first award – Best Original Screenplay. Theron makes a joke about how writers are hot, and then observes, “a writer wrote that.”  Blunt stands there looking redundant.

Ryan Gosling and Russell Crowe (nice combo) arrive on stage to present the next award.  They instigate a fake argument.  It isn’t funny, but everyone laughs politely.

An amusing film ‘bit’, which splices black actors and actresses into some of this year’s nominated movies, goes down very well with the crowd.  It becomes glaringly apparent that Rock is not going to let this theme go…

Sarah Silverman takes to the stage to introduce The Writing’s On The Wall by Sam Smith, nominated for Best Song.  She says of Bond, “I don’t want to say he’s terrible at sex, but he did sleep with 55 women in 25 movies and most of them tried to kill him afterward…”

Henry Cavill and Kerry Washington talk about The Martian and The Big Short – two of this year’s nominees for Best Picture.

J.K. Simmons arrives to announce the winner of Best Supporting Actress.  He gets straight to the point.

ACTRESS IN A SUPPORTING ROLE

Winslet was robbed.  But like Forrest Gump, ‘That’s all I have to say about that.’

Cate Blanchett is next to present.  Her dress is beautiful, which is apt given that the next category is Best Costume Design.

Uh-oh – Steve Carell and Tina Fey are here. Carell plays it straight, Fey acts weird.  Carell adds that Fey has been drinking.  She ends by saying, “The non-a-mees are…”

Margot Robbie and Jared Leto are here, both looking so, so beautiful.  Leto talks about Mirkens.  He says, “Explain it to the person next to you, or Google it.”  I happen to know that a Mirken is also known as a ‘Vagina Wig’.  I only know because I happen to have watched the acclaimed TV series, The L Word.  That is my story and I’m sticking to it.

Michael B. Jordan and Rachel McAdams arrive to present the next award.

Priyanka Chopra and Liev Schreiber are here to present the next statuette.

Chadwick Boseman and Chris Evans (of Captain America fame, not TFI Friday) are here to present the awards for sound.

The guys who collect the award swear on camera. “F**kin’ Mad Maxers! Come on!”  Everyone looks very uncomfortable.  This is going out before the watershed in the US.

Introduced as ‘Actor and Performance Capture Artist’ (which I think is rather interesting – he isn’t the only actor to do performance capture, though he has certainly been a pioneer), Andy Serkis takes to the stage to present.

Jason Bateman and Olivia Munn arrive to talk about the Scientific and Technical Awards, which take place annually about two weeks before the main awards ceremony.

Droids!  BB-8, R2-D2 and C-3PO arrive on stage.  BB-8 is amazing.  I want a life-size one that can follow me around everywhere I go.  Just throwing that out there.

Chris Rock asks members of the audience to help his daughters sell the most Girl Scout Cookies by reaching into their ‘millionaire pockets’ to buy some.

Ugh.  It’s the Minions.  I don’t get the appeal.  I hate when they have animated award presenters, because you know the audience can’t see them, except on the monitor.  It’s all a bit ‘cringe’.

We Can’t Live without Cosmos

Oh dear – now Woody and Buzz from Toy Story have been animated to give an award out. I am rolling my eyes right now…

Boy and the World

When Marnie Was There

Kevin Hart takes to the stage.  He says he thought he’d be in the front row this year because of all the ‘Black Stuff’ going on.  Alas.  He introduces The Weekend, who perform Earned It from Fifty Shades of Grey.  It’s a solid performance, with lots of leather-clad dancers on stage.

My Girl™ Kate Winslet and Reese Witherspoon are here to talk about two more nominees for Best Picture – Bridge of Spies and Spotlight.  Kate Winslet has the same glasses as me.  I am SO on trend.

ACTOR IN A SUPPORTING ROLE

Louis C.K. is the next presenter on stage.  He jokes that the winner is Mad Max: Fury Road, but adds, “Just kidding”.  Everyone laughs – including me.

Chau, beyond the Lines

Claude Lanzmann: Spectres of the Shoah

A Girl in the River: The Price of Forgiveness – WINNER

Daisy Ridley and Dev Patel arrive to present the next award.  They make quite a nice couple, actually…

The Look of Silence

Chris Rock reveals that they made over $65,000 selling Girl Scout cookies to celebs in the audience during the ceremony.

Whoopi Goldberg talks about the honorary Oscars® that were given out at a separate celebration.

Cheryl Boone Issacs takes the floor to promote change in Hollywood with regards to people of all races having equal opportunities.

Lewis Gossett Jr. is here to introduce the ‘In Memoriam’ segment, with a musical performance by Dave Grohl.  Amongst the notable deceased: Wes Craven, Christopher Lee, Robert Loggia, Omar Sharif, Leonard Nimoy, and the most heart breaking ones for me – Alan Rickman and James Horner.

Jacob Tremblay and Abraham Attah present the next one, but Rock runs on stage with boxes for them to stand on, and Tremblay’s box places him too far away from the microphone, and he can’t be heard properly when he speaks, which is a shame, because he is too cute.  Oh dear.

Everything Will Be Okay (Alles Wird Gut)

Embrace of the Serpent

Vice President of the United States Joe Biden arrives on stage to a standing ovation.  He urges that we change the culture of sexual abuse in any situation where ‘consent is not given’.  His speech is followed by an emotional performance of Best Song nominee ‘Til It Happens to You by Lady Gaga, featuring on stage the real victims of such abuse.  The performance also gets a standing ovation.

Farrell Williams and Quincy Jones are here to present.  Jones speak in a code that only his close colleagues will get.  Way to isolate 50 million people watching all over the world, Guys…

Common and John Legend introduce the next award.

“Earned It,” Fifty Shades of Grey

“Til It Happens To You,” The Hunting Ground

“Writing’s On The Wall,” Spectre – WINNER

Sam Smith dedicates his award to the LGBT community and proclaims himself to be a ‘Proud Gay Man’.

Sacha Baron-Cohen and Olivia Wilde take the stage to talk about two more Best Picture nominees, Room and Brooklyn.  Baron-Cohen is dressed as Ali G.  He injects some much-need British humour into proceedings.  I’m sure it was lost on LA’s finest.  At one point, he turns to Wilde and says, “You is WELL fit.”

ACTRESS IN A LEADING ROLE

ACTOR IN A LEADING ROLE

DiCaprio gets a standing ovation.  Even I cheer aloud.  My neighbours must think I’m having a great dream…it is now 5am.

Morgan Freeman takes the stage to give out the night’s big award – Best Picture.  He wears a loop earing in both ears.  Bling.

Everyone in the audience is clearly (pleasantly) surprised by this.

Leo has FINALLY done it.  He should have won for What’s Eating Gilbert Grape? – he should have won last year for The Wolf of Wall Street.  But hey – no matter.  He has his golden statue at long last.

And so ends the 88th Academy Awards 2016.  I have enjoyed this year, although I am getting a bit sick of people using the Oscars® ceremony as a political platform, be it gay pride, race equality, environmental issues, etc. – keep it light, people – we are here to celebrate the magic and sparkle of the movies – not get on our soap boxes and preach.  I really hope that next year everyone lightens up a bit and brings back the glitter to compliment the glam.

This is Emma Champion, signing off.  See you all next year. A pleasure as always.