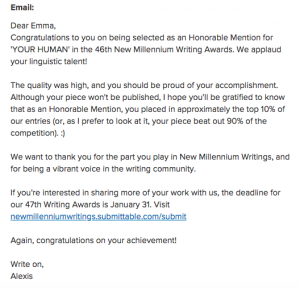 Emma Champion’s first ever piece of short fiction has garnered the attention of the judging panel in the 46th New Millennium Writings Awards, 2018.

The 6000-word story, entitled YOUR HUMAN, was entered into the competition last year, with winners and finalists announced in January 2019.

New Millennium Writings is a prize-winning literary journal based in Tennessee, US. Editor and Publisher for the journal, Alexis Williams Carr, contacted Emma via email (see image above) to congratulate her, saying “…you should be proud of your accomplishment…as an Honourable Mention, you placed in approximately the top 10% of our entries…” and thanked her “…for being a vibrant voice in the writing community.”

Set in contemporary America somewhere in the not-too-distant future, YOUR HUMAN examines our need as a species for connection, and the role that technology plays in filling the void.

This is the first fiction writing accolade Emma has received, and serves as an exciting precursor to the release of her debut novel, TAIDEN’S TRUTH, due out later this year.