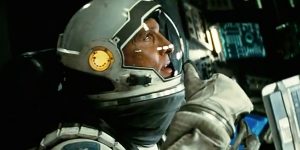 Press screenings are quite fascinating. Right away, it is apparent that this is no ordinary movie-going crowd. This is a concentration of geek-fuelled formality; pens and pads trump popcorn, journalists, authors and bloggers talk shop, interns shake hands with editors. There are even goodie bags! However, as grateful as I am to receive anything for free, I have a bone to pick with Warner Bros. over this one. Now, I absolutely ADORE tie-in movie tat. So, I excitedly reach into the Warner Bros. branded bag and find…a mouse mat. Mouse mat?! Hello, 1998! Given the technological nature of the film’s content, surely something a little more high-tech would have been more befitting? The marketer in me leaps into high gear, and I find myself sitting in my comfy, leopard-print chair within the spectacular Odeon Leicester Square, thinking of all the corporate freebies that might have had more of an impact – I settle upon movie logo branded USB sticks pre-loaded with a digital version of the film’s press pack. As I judge Warner Bros. marketing department for not head-hunting me given my sheer genius, the lights go out, the audience falls silent, and the magic begins – no ads, no trailers – this is business.

Interstellar (2014) tells the story of the end of the world. Crops are dying, food is in short supply. Rich dark soil has turned to thick dry dust which piles up on every surface and attacks towns and cities in crippling cloud storms. NASA has been disbanded. The public have been persuaded that the Apollo missions were faked to bankrupt Russia (a cute hat tilt to all the conspiracy theorists). Kids in schools are encouraged away from careers in engineering and persuaded instead to become farmers. So, when young Murphy Cooper (Mackenzie Foy) notices that the strange goings on in her bedroom (books falling off shelves, dust falling in patterns) seem to be sending her some sort of message, former NASA pilot and doting Dad, known only as Cooper (Matthew McConaughey), tries to help his daughter crack the code. Based on the theory that the code is actually map coordinates, an impromptu road trip leads them to the top secret base of NASA, who are still in operation, literally under ground in a hidden bunker. There they meet Professor Brand (Michael Caine) who Cooper remembers from his pilot days, his daughter, Dr. Amelia Brand (Anne Hathaway) and a whole bunch of scientists and experts working tirelessly on a plan to find a new planet for the human race to populate. With a number of secret missions having already narrowed the options down to three possible candidate planets, in a new galaxy reachable via a black hole, all they need is a skilled NASA pilot to get Dr. Brand and her team there, take samples from the new worlds and decide which of the three would make the best Earth #2. Since he just happens to be a skilled NASA pilot, and fate appears to have thrown him a bone, Cooper is then torn between saving the world and leaving his children, and, naturally, adoring daughter Murphy (or ‘Murph’ as she is referred to) isn’t too happy when her Dad chooses space over their dusty farm. With that, Cooper, Dr. Brand and the team travel beyond our solar system to save humans from extinction. However, it becomes all too apparent that Cooper may have made the wrong choice…

Like Christopher Nolan’s previous proverbial head f***, Inception (2010), Interstellar is one of those films that will drive people crazy. It’ll be discussed, debated and dissected by all who come into contact with it. It demands repeat viewings. It boggles the mind – there was baffled laughter from the crowd during the more brain-scrambling scenes. It challenges you as a viewer, provoking your emotions, inspiring you to smile, causing your shoulders to tense and your head to think. For those reasons, it will not be for everybody. But, those reasons are also why Interstellar is an absolutely stunning piece of film making.

That’s not to say that Interstellar is not without its problems. McConaughey’s Cooper is very similar to the now infamous and much-spoofed Bane (played by Tom Hardy) from Nolan’s Bat sequel, The Dark Knight Rises (2012) – in that, at times, his southern drawl is so thick that you can’t understand what he is saying. And, sarcastic, banter-loving robot TARS (voiced by Bill Irwin) is the most awkward-looking machine you’ve ever seen, even if his dialogue does provide the majority of the film’s comic relief. I would also say that the film’s running time is about 45 minutes too long, meaning there will be people suffering from bum-numbery, wishing they could press pause for a quick cup of tea/cigarette/stiff whiskey, etc. Connoisseurs of simple, straight-forward, CG-ridden, Summer blockbusters will find this slow in places, and perhaps even a touch disappointing. I overheard someone say as we left the auditorium, ‘Would you have paid eleven quid to sit through that?’ I, myself, felt these comments were a tad harsh, but this opinion will be shared by many who can’t follow or fathom the profundity and complexity of the Nolan Brothers’ screenplay. It was also rather unfortunate that I was able to figure out one of the movie’s main twists – the identity of Murph’s ‘ghost’ – rather early on in the movie.

Having said that, there is a multitude contained within Interstellar’s three-hour time frame with the capacity to haunt your thoughts long after the credits roll. There are some awe-inspiring set pieces – tsunamis, explosions, rescues – those who look for action from their science fiction movies should find enough here to hold their interest. There is also some first-class acting to behold – the scene in which Cooper sits through twenty-one years worth of video messages from his family is particularly noteworthy in McConaughey’s case. The look of the film is quite something – Dutch-Swedish cinematographer, Hoyte Van Hoytema, known for his work on Spike Jonze’s acclaimed Her (2013) and the David O. Russell’s The Fighter (2011), does a fantastic job creating the visual tone of Interstellar. From the stark, desolate landscapes of the not-so-distant future Earth, to the spectacular inner sanctum of Gargantua – a monstrous, roaring black hole, Van Hoytema’s signature accents each staggering visual with a kind of raw honesty – quite a feat when dealing with worlds and scenarios people have never seen before. His upcoming work with Sam Mendes on Bond 24, due in 2015, is something many will be excited to see after this. Add to the mix an uncredited appearance from Prince of Hollywood™, Matt Damon, and you couldn’t really ask for more.

Besides predictably brilliant performances from Michael Caine, Jessica Chastain (as an older Murph), Casey Affleck and the rest of the (inter)stellar cast, it is the performance of the film’s nth character, Hans Zimmer’s alluring score, that is perhaps the most striking. Expertly creating tension, punctuating sentimental beats and causing hearts to race during the more high octane sequences, the music swells and swirls and penetrates so effortlessly, complimenting the story’s flavour the way strawberries do for champagne.

Media pundits will call this ‘Inception in Space’, and make comparisons to 2001: A Space Odyssey (1968) – but I’m not going to do that. What Nolan has created is a piece of filmmaking which is refreshingly – well, fresh, whilst maintaining the unmistakable style of his back catalogue. He takes the story of the end of the world, and tells it with all the science and intelligence you might expect, but interweaves it with aspects of the human condition, making the unfamiliar relatable, and the journeys of the characters utterly compelling. This is a film about the passage of time; about how the little moments in life are actually the big ones, about our connections to the ones we love and our determination as a species to survive. That’s more depth for your dollar than the average space movie can muster. “What is amazing to me is that while the excitement of the story lies in its scope – the thrill of adventure and discovery of the unknown – one of my favourite things about Chris Nolan is the heartbeat of humanity he gives to his films,” says Academy Award winner, McConaughey. “No one handles the sheer mass and scale of a world like he does because it always comes off as something personal and intimate.”

“Interstellar is about all kinds of things,” Christopher Nolan explains, “–who we are, where we’re going – but for me, it’s about being a father. Putting those ideas foremost in my process gives the story to the film, rather than just enjoying the space elements for space’s sake.”

‘Love is the one thing that transcends time and space,’ declares Hathaway’s Dr. Brand at one point. And although a few men in the audience guffawed as this line was uttered, that is precisely the film’s message. Emotional, and, at times, exhausting to watch, Interstellar delivers a much-needed injection of originality into a world of cinema saturated by half-baked sequels and TV remakes. I highly recommend giving it a look – if nothing else to enable you to join the inevitable conversations it will generate. Like it or hate it, let yourself experience it, and I guarantee that you will be thinking about it for days afterwards. That, for me, is the mark of a good movie.

Interstellar is released on 7 November 2014 nationwide.